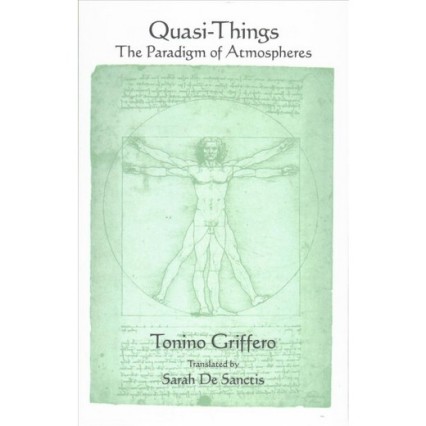 For english readers it is now available, edited for SUNYPress, the english edition of Quasi things by Tonino Griffero, full Professor of Aesthetics at the University of Rome Tor Vergata, translated by Sarah De Sanctis. The author spent several years studying the problem of Atmospheres, quasi things that do not exist fully in the traditional sense as substances or events, even if they powerfully act on us and on our states of mind.

An index of the volume is available here, and we would like to report some of the most meaningful comments to this important work.

“The task of modern phenomenology is to dissolve, with the help of corrections and additions, the contrasts solidified in the bath of involuntary vital experience, thus opening up new horizons of questioning and understanding. Tonino Griffero accomplishes this task by carefully ploughing the field of quasi-things, which I inaugurated. The latter exist between things in the proper sense and sense data, both elements whose cognitive primacy has been discussed by analytic philosophy (Russell, Austin) without acknowledging the central role of quasi-things. The appearance [coming to light] of quasi-things bears the promise of bright future prospects. This is why the book is worthy of great attention”. (Hermann Schmitz, Professor of Philosophy emeritus, University of Kiel, Germany).

“This volume is a significant contribution to the expanding literature on atmospheres, which Griffero defines as the felt qualities of things, situations, places, or environmental phenomena sustaining a particular ambience, character, or mood. More broadly, this philosopher’s concern is “quasi-things,” understood as any entity or event radiating a particular ineffable presence, which Griffero illustrates via discussion of such phenomena as wind and light. Most importantly, the book lays the groundwork for an innovative way of interdisciplinary study identified as “pathic aesthetics”— the study of quasi-things and the lived manner in which they evoke “a deep and intimate felt-bodily resonance through their expressive qualities”. (David Seamon, Professor of Architecture, Kansas State University, and Editor of Environmental & Architectural Phenomenology).

“Griffero has written a phenomenological exploration of the pre-reflective dimensions of experience in the form of a pathetic aesthetics. Working through experience rather than objects, he pursues an extensive inquiry into what may be called an aesthetics of immateriality. Central in his inquiry into the core of aesthetic experience is not art and beauty but the pathetic, affective involvement of the felt body. This book considers atmospheres to be quasi-things that function in the body as affordances that evoke behavioral responses.  Especially illuminating are his extended inquiries into atmospheres such as pain, shame, the gaze, and light.  This book, rich in originality and insight, illuminates an important new direction in the study of pre-reflective experience”. (Arnold Berleant, founding editor of Contemporary Aesthetics).